Greetings! Railgunfan75 here. It is a great time for comic book fans. Starting with the shows Arrow and Agents of Shield, there has been a huge wave of our favorite comic book characters coming to the small screen. One of these new shows is Gotham.

Gotham takes place in Gotham City. After witnessing the murder of his parents, Bruce Wayne seeks the individual responsible for his parents’ murder. At the same time, Detective James Gordon is assigned to the case and is also investigating the murder. In the process of trying to solve the case, he discovers that Gotham is really a much darker place than anyone realized and encounters individuals who will become some of Gotham’s greatest foes. 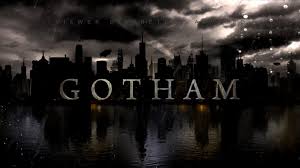 After viewing the first 4 episodes, I have quite impressed with the series so far. Many people feared that a series set in the Batman universe without Batman would not be entertaining. However, the series is quite the opposite. The story so far has been engrossing as the web of the mysteries surrounding the characters and the murder of the Waynes becomes larger and more complicated. The story so far has been a mix of an episodic format with an overall story. This particular format has become very common with tv series and it works well for this series. At this point the groundwork is still being laid but the story has been quite good. It has been playing out like a crime drama in the Batman universe and it works really well. The series has also been tossing in easter eggs for us die hard fans and it is really a nice touch.

The characters while still in the early stages are quite interesting and certainly match the characters from the comics with a few twists mixed in. Gordon is the straight arrow detective, the Penguin is as manipulative as ever and Bruce is already showing signs of becoming the brooding Batman.

The setting and feel of the show is typical of what you would expect of a story that takes place in Gotham. It is easy to believe that this city is Gotham brought to life. It is certainly a dark looking city and the setting really gives off the vibe of dark times. 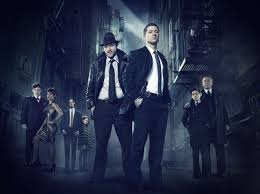 Overall, I have been quite impressed with Gotham so far. The show is an excellent and dark portrayal of the formative days of the Batman universe. The story and characters are quite interesting to watch and the setting is dark and ominous. If you are a fan of the Batman universe or just comics in general, you should check this series out.

So what are your thoughts? Please comment down below. For future posts, I am still planning reviews for Fairy Tail, Infinite Stratos, Steins;Gate, and The Devil is a Part Timer. Further first impression posts will include Fate/Stay Night Unlimited Blade Works, Log Horizon Season 2, and when Supernatural Battles Become Commonplace.  Plus more Weiss Schwarz content is on it’s way. So until next time, this is Railgunfan75 signing off and telling you to unleash your inner geek!