Greetings! Railgunfan75 here with my first installment of a new feature-Chibi Reviews. These will be anime reviews which will be shorter than my typical review. Hopefully, you will enjoy the new feature.

For the first installment, I am going to give my long overdue thoughts about a second “season” to a series that I ranked fairly highly. This series was certainly not without it flaws but it could be really entertaining. This series has sparked many arguments and debates between those who love the series and those who hate it. This series is Sword Art Online and this time I will be discussing it’s latest episodes- Sword Art Online II.

Since this is a continuation, for an overall synopsis for Sword Art Online- see my previous review.

For a summary of this review check out the Review Summary section at the end of the post.

I will be the first to admit that the first two arcs of SAO had their problems. From issues with pacing to the fact that Kirito has a harem by the end of the arcs, there are quite a few criticisms that one could place on the first two arcs. Sadly many of the problems continue in the latest arcs with less of an upside this time around.

In these arcs we are introduced to two characters of note, Sinon and Yuuki. First appearing in the Gun Gale arc, Sinon starts off a character you can get behind. They establish early on that she is a bad ass and really get your hopes up. She makes a great first impression and in the beginning it feels like she could possibly steal the show. She has a great backstory and we get to see how she is outside of the game (this is something the series needs more of). However, part way through the arc she falls in the same trap as most of the characters in the series- needing Kirito to save her. This was really disappointing to see her just regress to that role. She is not a terrible character but she had the potential to be so much better than she turned out to be.

The second major character introduced in the final arc of the series is Yuuki. Yuuki is great for a few reasons. The first is that she does not become part of Kirito’s harem and the second is that she is just a fun character to watch. As a character, she brought a spark to series which really needed one. She also was a character which had a clear goal and it was a goal that you could easily get behind. Once it is clear the reasons behind this goal, it is very easy to get behind this character. In addition her backstory is really interesting as well. This is another case where you get a glimpse of a character in the real world which is one of the positives of the series. An overall strong character and one of the best characters in the series in my opinion. 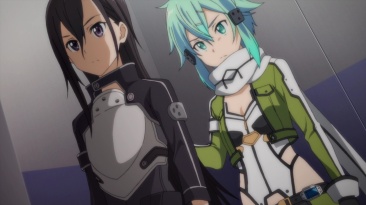 The first arc- the Gun Gale arc has some series pacing issues. Many people criticized the first set of the arcs for advancing the plot too fast. In the case of Gun Gale, there are two major issues. The first is the plot pacing. Overall, the plot advances way too slow.  Once we get to around the 6th episode or so, the story just basically stops and repeats plot information constantly. For both characters we get aspects of their pasts which factor into their mindset during this arc. This would be fine normally but it is over emphasized in this story. Instead of moving on to a new plot point, we get the past events repeated to us. In Kirito’s case, if such past events were that important why weren’t these events shown to us previously? The second main problem with the Gun Gale arc is the villain itself. Death Gun was really rather boring in my opinion.Considering that they strongly suggest the cause of his abilities in the beginning of the arc- the reveal at the end wasn’t as shocking as it could have been.

The second arc,  Calibur was a decent enough story arc. You had a fun little quest story and it was cool to see all of the characters on screen at once. However, it really was just another story to emphasize how much of an op character Kirito is and to a reminder of his insane harem. Not a bad arc but not much happens that really warrants discussion. 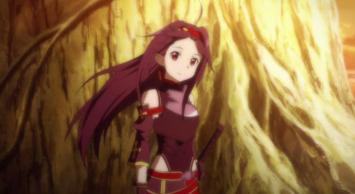 I was however really impressed the final arc- Mother’s Rosario. There were three really positive things that came out of this arc. Asuna gets some substantial character development,you have a story which really explores the positive impact that technology like the Nerve Gear could actually have, and Kirito is not at the center of the story.  This was the most personal and emotional story arc by far in this franchise and it was nice to see. This type of story was really touched upon in the beginning of the franchise but not really expanded upon until this arc came along. This arc finally has the appropriate pacing which is a major flaw with this franchise in general.  You also have the new character of Yuuki (as I mentioned before) who was an amazing addition to the franchise. In my opinion, this arc was the best one of the series since the original story arc in season 1.

The animation and music are on par with what saw with the original Sword Art Online. The animation is gorgeous and the soundtrack continues with the epic scale that we saw before. The opening and closing theme songs are all amazing to listen to as well. My personal favorite is actually the shortest lived theme- “No More Time Machine” bu Lisa which was only featured in three episodes.While all of themes were great, that one was my favorite by far. Also a quick nod to both the Japanese and Engligh voice cast as they both did a great job.

Overall, Sword Art Online II just falls short of it’s predecessor in terms of overall quality. I will admit that I did rate the original fairly highly even with it’s flaws. I was really entertained with the original and could overlook it’s many problems. However with SAO II, the entertainment value decreases and the problems increase. I was just less impressed with this installment. There were 6 really amazing episodes and the rest were either average or boring. Because of this, Sword Art Online II receives a Silver ranking.

Pros: –Mother’s Rosario Arc was an intense emotional experience with probably the best writing of the series so far.

– The animation and music are still as amazing as ever.

– Getting to see more of the world and the characters outside of the games was nice.

– Yuuki was a great addition to the series.

-It was nice to see an story line focused on Asuna.

Cons:- The Phantom Bullet Arc was not as exciting as it could have been.

– Many of the series issues from seasons 1 and 2 not addressed.

This concludes my first Chibi review. What did you think of the shorter format and of the series itself? Please comment below. Also please check out my Facebook (Railgunfan75’s Geek Blog) and Twitter (@railgunfan75) for news and updates. Until next time, this is Railgunfan75 signing off. See ya!