The first announcement is that we have a release date for the highly anticipated Re:Zero set release. It has been announced that the set will release in January. The trial deck will release on January 13th and the booster pack will release on January 20th.  Further details about the set such as the exact number of cards have yet to be released but we have a release date which is certainly good news. I can’t wait to hear more about this set!

The second piece of news is that we have a couple of sets announced for the remaining months of 2016.The first set which is already getting previews is D.S. Dal Segno/Da Capo III With You. This set will be a full booster releasing later this month on September 28th. This set will be compatible will the previous Da Capo sets, so we could get another older set getting new support!

The Love Live Sunshine booster sings and dances their way to Weiss Schwarz this fall as well.  This set releases Nov 25th with the trial deck already released. I imagine previews will start soon, but keep in mind that this set is a stand alone set and cannot be combined with other Love Live sets. Either way- nothing wrong with more idols right? 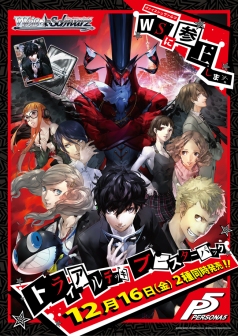 Persona fans rejoice as a new set has been announced for a December release. A trial deck and full booster will be released on December 16. I’ve heard conflicting information as to whether the set will be playable with other Persona sets, but considering the popularity of the series regardless, I’m sure this will sell well.

Are you a Railgun, Haruhi, or Kill la Kill player? If so then Bushiroad dropped a bombshell announcement with the news that these 3 sets will be getting Power Up Sets!  All three will release on December 23. These three sets are really popular but have not been able to keep up with current meta. After seeing what the first wave of sets did for Clannad and Log Horizon, I am optimistic that these power up sets will give a nice boost to these decks. These  sets really needed a boost and I am glad to see them get one.

It should be noted that all of these releases including the Power Up Sets will be released in Japanese only- so sorry English Haruhi and Kill la Kill players, no new cards for you unfortunately. Also with the exception of Persona 5, all of these releases are up for pre-order at the time of this blog post.

So what do you think of this news? Are you looking forward to any of these releases? Please comment below. If you enjoy my content, please follow me on Twitter (@Railgunfan75) and Facebook (Railgunfan75’s Geek Blog) for news and updates. My Illya deck profile will be coming soon, so stay tuned for that! Until next time, this is Railgunfan75 signing off! I’m off to place my preorders- see ya!