Greetings! This year is setting up to be another landmark year for the Fate franchise. We have the release of the new mobile game Fate Grand Order (which is amazing), a new anime series, the first Heaven’s Feel movie among other things. Long time readers know of my love of the franchise (see my reviews for other installments of the Fate franchise here Fate/Zero Review: Is the Quest for the Holy Grail a Worthwhile One? & Fate Stay Night: Unlimited Blade Works (2014) Review: Is This Quest A Success?). Both of these series would receive my highest ranking under the current system. One installment which I have not yet discussed is the 2006 anime adaptation of Fate/ Stay Night.

Also I know I said that full reviews were going to end but this series review is just too long to qualify under the Chibi category- there may be more like this coming as there are series that I wish to have a long discussion about.

After a fateful encounter one night, Shirou Emiya is dragged into a secret conflict among mages. This is the Holy Grail War a conflict where seven mages and their seven servants fight for the right to obtain the Holy Grail, a omnipotent wish granting device which will grant the wish of the victor. The servants all of of which are spirits of characters from history and myth fight on behalf of the mages who are called masters. Shirou who is a novice mage himself, has no ides what was he has been dragged into bu the ensuing conflict will change his life in ways he could not expect.

There is one tough challenge involved when reviewing this series- the inevitable comparisons to Fate/ Zero and Unlimited Blade Works. Such comparisons are the crutch behind the generally negatively opinion towards the series. I will do my best to avoid such comparisons. Fate/Stay Night is a nice inclusion to the Fate franchise. Fate/Stay Night has it’s problems but also has a bunch of good things going for it, especially if you look at the series on it’s own.

One of the series high points is the cast of characters. The cast is actually quite cool. This of course starts a very popular character in the anime community. That of course is the character of Saber. Saber is an amazing character and by far my favorite in any anime. Saber is kind, a bad ass, determined to achieve her goals, and has a incredibly strong moral compass. Saber has a real charm to her that many characters don’t have as she also has a soft side and cares deeply for the well being of others. Saber is an easy character to get behind, She is one of the central characters of the series and her story is one of the central points of the plot. This is one of the reasons while this series appeals to me- this is the series where here story really takes center stage and it is a great one at that. 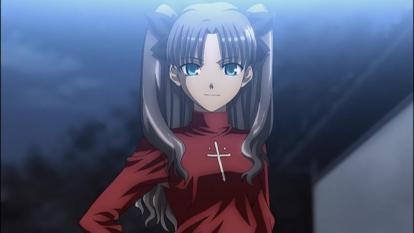 Besides Saber, many of the other cast members are great as well. Another favorite of mine and many fans, the character of Rin is another very strong character. She possesses many of the same traits that Saber has, but also has a bit of an attitude to go with it and that makes her very fun to watch. Rin acts a great counter point to our lead Shirou and also kind of serves as the mouth of the audience. She says many of things that we are thinking and certainly is a character which feels genuine. Rin is one of my favorite characters and one of the best of the series.

Besides Rin and Saber, Stay Night also boasts a great supporting cast. From the mysterious and cranky Archer to the mysterious Kirei to the adorable yet dangerous Illya, the other characters in the series each add another layer and another perspective to the series. The series does a great job of showing us the motivations and desires of these characters. These characters help don’t hinder the narrative and very few felt like just throwaway characters meant to just pad the plot or give the main cast a foil to play off. These characters are all fascinating and if there was a negative thing to say- it would be that these characters don’t get enough screen time. The plot is very centered around, Rin, Archer, Shirou and Saber. As such the other characters certainly take a back seat in this story. And while that helps the plot to an extent, it would have been interesting to see more of many of the characters.

Of course a discussion about the characters would not be complete without discussing the character of Shirou. Shirou is admittedly not a great character.. On the positive side, Shirou wants to be the noble hero who can save everyone and that is certainly admirable and an aspect that I liked about him. However, the main problem is that he takes those ideas too far and gets himself into unnecessary trouble. The idea of having a character like this is not in itself flawed, in this case the execution is. The idea of Shirou figuring out how far he should take his dream is a great story idea. However, the writing just makes him to be an complete idiot. He rushes into situations unprepared, doesn’t trust others to help him at times, and can be overly preachy.  And let’s not forget, he is responsible for one of the most iconic anime memes.

One area which many people don’t give enough credit to in this series is it’s plot. While not perfect it does quite a few things right. The first is in it’s setup. The series wastes little time in getting you introduced to the characters and the scenario that they find themselves in. The idea behind the Holy Grail War is explained rather well in this installment as it is explained quite well what the goals are for each of the characters. The concept of the Holy Grail War is very cool in itself. Yes it is a glorified battle royal but the inclusion of legendary characters from history and myth is an amazing addition to this plot device.

The overall execution of the plot is better than people make it out to be. Especially in the early going there are plenty of interesting and exciting plot points as more characters are introduced and the subsequent battles play out. The series does a great job of emphasizing the staeks that are in play and does not shy away dark moments. There are also plenty of interesting character interactions as well especially between the members of the main cast. These include conflicts based on differences in philosophy and morals which lead to additional conflicts besides what one would initially expect. The conflict is more than just a battle between individuals, it is also a battle of philosophies. This additional layer makes the plot that much more fascinating to watch and one thing which sets the Fate series apart. The plot does a great job of showing us that the characters are much more than initial appearances which is something that many series can draw from. 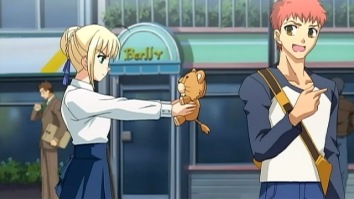 If there were an issue to be noted with the story, it would be that at times the story departs too drastically from the serious plot. The big issue here is not with the change of tone as these can certainly help a plot- it is the sudden nature of the shifts which hurt the series. Two characters fighting to the death in one scene are then seen later just having a casual conversation for no real reason. When the plot is serious and focused on the main goal it is incredibly fascinating to watch but when it deviates from this, it falls flat.

Now on to the animation and visuals. In both cases, they would fall into the good not great category. The soundtrack is pleasurable enough to listen to with a couple of tracks really standing out. One track of note is Emiya’s theme which turns out to great battle music even if it is not what one would typically expect. Most of the soundtrack is not the bombastic epic songs that one would expect nor is incredibly memorable but it does the job nicely.  The series is from 2006 and while the animation looks nice, the visuals at this point do show their age at times. There is nothing inherently wrong with the animation, the characters are well designed, the action sequences are clean, and it was clear that great care was taken to animate this. The series just doesn’t seem to quite have the level of polish that even other series of the time can have. Because of this, it just feels like the visuals feel a little old.

Fate/ Stay Night is the black sheep in the Fate anime-verse and I think that many assessments which trash the series are unfair. Yes, the series is not the mark of perfection that other installments are but it also does many things successfully. The premise is set up nicely, there are interesting characters and exciting plot points. As such, I give Fate/ Stay Night a Gold ranking. If you are a Fate fan and haven’t checked out this series yet, then I would certainly say give it a try. There are some good things in here to be experienced.

Pros: –Saber, Saber, and Saber- one of the best all time anime girls

-Series has a great concept and setup.

-Series contains some of the best side characters in anime

-Because the series is so focused on the main characters, there are great character explorations

Cons: –The character of Shirou can be off putting

-The animation shows its age at times

That concludes my review of Fate/Stay Night. What do you think of the series? Please comment below. Also if enjoy my content please follow me on Twitter (@Railgunfan75) or Facebook (Railgunfan75’s Geek Blog) for news and updates. So until next time, this is Railgunfan75 signing off! See ya soon!

4 thoughts on “Fate/Stay Night: Is this black sheep of the Fate Universe really that bad?”