Greetings! We are now in the middle of another week and it is time for another installment of What am I Watching. This week was certainly a crazy one for me and I didn’t have nearly enough time to watch anime. Life sucks when it gets in the way of things. Some shows got missed and hopefully I can pick them back up over the next week. However, there were some gems in the episodes I did get to watch this week and I am excited to talk about these episodes. So without any delay, let’s get started.

We were wondering, wishing, and hoping for the suffering to return to Steins; Gate and it happened with this weeks episode. The payoff for the series’ events is here and wow was the episode amazing. Mayuri was really the star of the episode. It was great to see her finally admit her feelings for Okabe and to see her take charge of things. It was great to see this and hopefully this will propel Okabe into action even further. The episode and a couple of them before brings the opposing viewpoints of Okabe and the rest of the group to the forefront. And while you can certainly understand Okabe’s viewpoint (as we know how much he has suffered), you can certainly agree with the perspective of everyone else who can see how miserable Okabe is. You can basically say that that Mayuri’s decision proves how awesome of a character she is. Such a great episode.

My sports anime phase continued this week with the conclusion of Big Windup and the start of Major 2nd. Big Windup was certainly a solid series- it wasn’t without it’s issues but overall the ride was enjoyable. Major 2nd is actually currently airing (so I can add another to my seasonal list) and this is one that I certainly will work to get caught up on. The series has been great so far.

On the continuing series front, Hanebado and Harukana Receive continued this week and my viewpoints on the series are starting to shift. In the early weeks, I thought Hanebado was the superior series but now it seems like the Harukana is becoming the stronger series. Hanebado is still a solid series but it starting to run into some narrative issues. Harukana is doing better things with it’s narrative at the moment- it seems like thed story has more focus and progressing at a better pace. Hanebado had a great episode with Riko as the focus last week but it felt like this week’s episode fell a bit flatter this week. It was still good but not as amazing as it could have been. Both are still on my watch list as they are good shows. 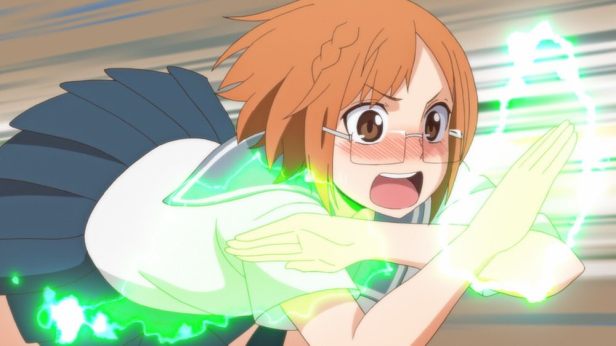 Chio’s School Road delivered another fantastic dubbed episode this week. I am glad I waited for the dub premiere as the cast is on point with this one. I thought the continuation of the “Bloody Butterfly” story was absolutely brilliant. I loved how that whole thing was handled and how easily they were able to convince the rest of the biker gang as to how dangerous she was. This is certainly on my list for anime comedy of the year.

The license exam arc of My Hero Academia has been quite entertaining and in this week’s dub episode we get to the start of the exam. This episode picked up the action once again and in a way which was certainly refreshing. Yes, there is something at stake with this arc but it is nice to see that the stakes are not lives. This scenario has tension but also allows the story to be fun as well. This current season has been amazing to watch so far.

My only disappointment is that I couldn’t watch more anime this week.

I am seriously considering a full re-watch of the original Steins;Gate (I did start one over a month ago but that plan fell apart) as Steins; Gate 0 approaches it’s finale. I am also considering re-watching A Certain Magical Index again before the new season premiere this fall.

I’ve only seen the first 2 episode of Revue Starlight and I am still really trying to figure the series out. It’s not bad so far- just different than what I was expecting.

Iron Blooded Orphans is continuing to impress me. Yes, I am still in the early stages of the series but the setup so far has been done rather well. I am certainly excited to continue this series.

So that is it fellow anime fans for this week. What did you enjoy from this last week. Any series that I have overlooked? Please comment below or message me on Twitter (@Railgunfan75) or Facebook (Railgunfan75’s Geek Blog). So until next time, this is Railgunfan75 signing off. See you next time and stay geeky my friends!