Greetings! I am back with this week’s post and am actually on time for the first time in weeks. I also had the time to sit down and watch anime for once as well. We are now down the home stretch for the summer season and while the season certainly was a step back from the Spring season, there are still plenty of good series to discuss. So I won’t delay any further- here is the list!

Cells at Work makes the highlight reel again this week. I have said it before and I will say it again, Cells at Work deserves the hype that it is receiving. The series did an excellent job this week of taking something which is typically presented in a boring way and making an engaging narrative out of it. The back stories for Killer T and Helper T cells were done really well. The story was interesting and we all got to learn something. Admittedly, I am learning new things from this series and I even studied science and Biology while I was in school (though my focus wasn’t human anatomy). Episode 9 was another great episode.

On the comedy front, Chio’s School Road was amazing this week. I did accidentally talk a bit about the episode last week but I will emphasize how funny the episode was. Chio’s and Manana’s relationship is easily one of the most entertaining ones that I have seen in anime. Both these characters are certainly jerks at times and they play off of each other really well. I especially enjoyed the part in episode 6 with Chio, Manana and the bridge. That scene was incredibly hilarious and gave a moment where I thought- how are these girls friends? 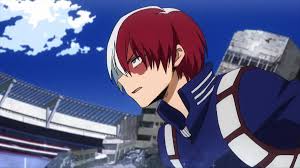 My Hero Academia gave us another compelling episode this week. One of the best subplots of the series is Todoroki’s and we get another step of his story this week. This episode showed that he still has to take steps to be the hero that he wants to be. Decisions are typically not made in a bubble and Todoroki’s past kind of came back yo haunt him this week. I liked also how they used Isuku as a bit of a counter point in the episode with his focus simply on the task at hand. It was a great way to finish off the events of the licensing exam- the only question now (for those of us who haven’t read the manga) is who passed and who failed.

Finally, I wanted to highlight the latest episode of Harukana Receive (which I believe is a bit underrated).  The latest episode was quite good and heart warming. We are certainly going to get an interesting end to the series with the matchup between friends. I am looking forward to the final two episodes for sure. This is a series which has done it’s characters justice in my opinion by giving them a solid narrative. This scenario while a simple plot device allowed for some great moments this week. I am enjoying this series quite a bit.

The delay of Steins; Gate 0 episode a week was disappointing for sure, especially with the cliffhanger ending from episode 19.

Hanebado is at it;s best when the focus is on the other members of the team. Ayano is not a terrible character but she wouldn;t be my pick to center a narrative around. Especially when she is being nasty to other people for no reason.

Many people bash Holmes of Kyoto but I find it to be a relaxing and charming series. Is it the best of the season? Absolutely not. However, I feel that it is better than people are giving it credit for.

Also I’m 6 episodes into Island now and still am not sure what I think about the series. I am still curious enough to keep watching and it does some good things. The mystery elements are certainly solid, there is some good humor and the characters are solid. However,  I certainly don’t think it is the top tier of series from this year. Granted there is stiff competition but when you have a series which struggles to establish an identity, it stops it from being truly great. I will however wait until the end of the series to pass any final judgement.

That concludes my thoughts for the week’s episodes. What did you enjoy from the past week? Any recommendations? Please comment below or follow me on Twitter (@Railgunfan75) or Facebook (Railgunfan75’s Geek Blog). Also if you haven’t done so already, please submit you nominations for who you want to participate in my first annual Best Boy Classic. The information can be found  here. So until next time, this is Railgunfan75 signing off. Stay geeky my friends!

All images are the property of the respective copyright holders. I do not claim ownership over any of these images.